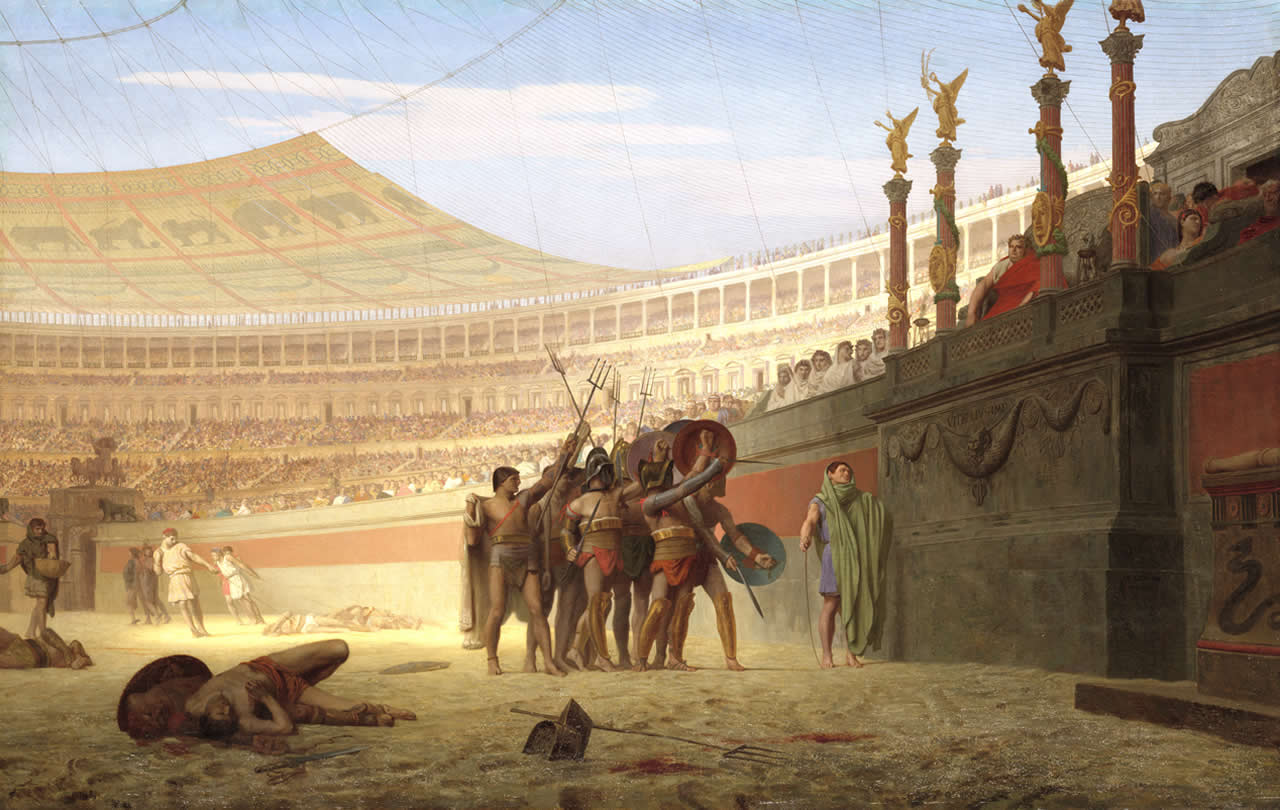 Window blinds aren't a new invention. In fact, in their more primitive guise, it's likely that they date back many thousands of years, with Persian and ancient Egyptian records both documenting the use of window coverings in one form or another. As we mentioned in our previous history of Venetian blinds post, the Ancient Egyptians had been using slatted blinds for centuries, quite often fashioning them from reeds whilst in China, strips of bamboo were commonly used as an alternative. Although there isn't any conclusive proof of where and when they were used for the very first time, it's clear that "blinds" have been around for a very, very long time.

If you paid attention in history class at school, you'll be aware that the Roman Colosseum (a.k.a. the Flavian Amphitheatre) is a large, oval-shaped amphitheatre in the centre of the city of Rome in Italy. This incredible feat of Roman engineering was a landmark in its day... and still is.

Although nowhere near as impressive as it was in its heyday, much of the structure has stood the test of time well and the Colosseum is, without doubt, still one of the most iconic ancient structures on the planet. 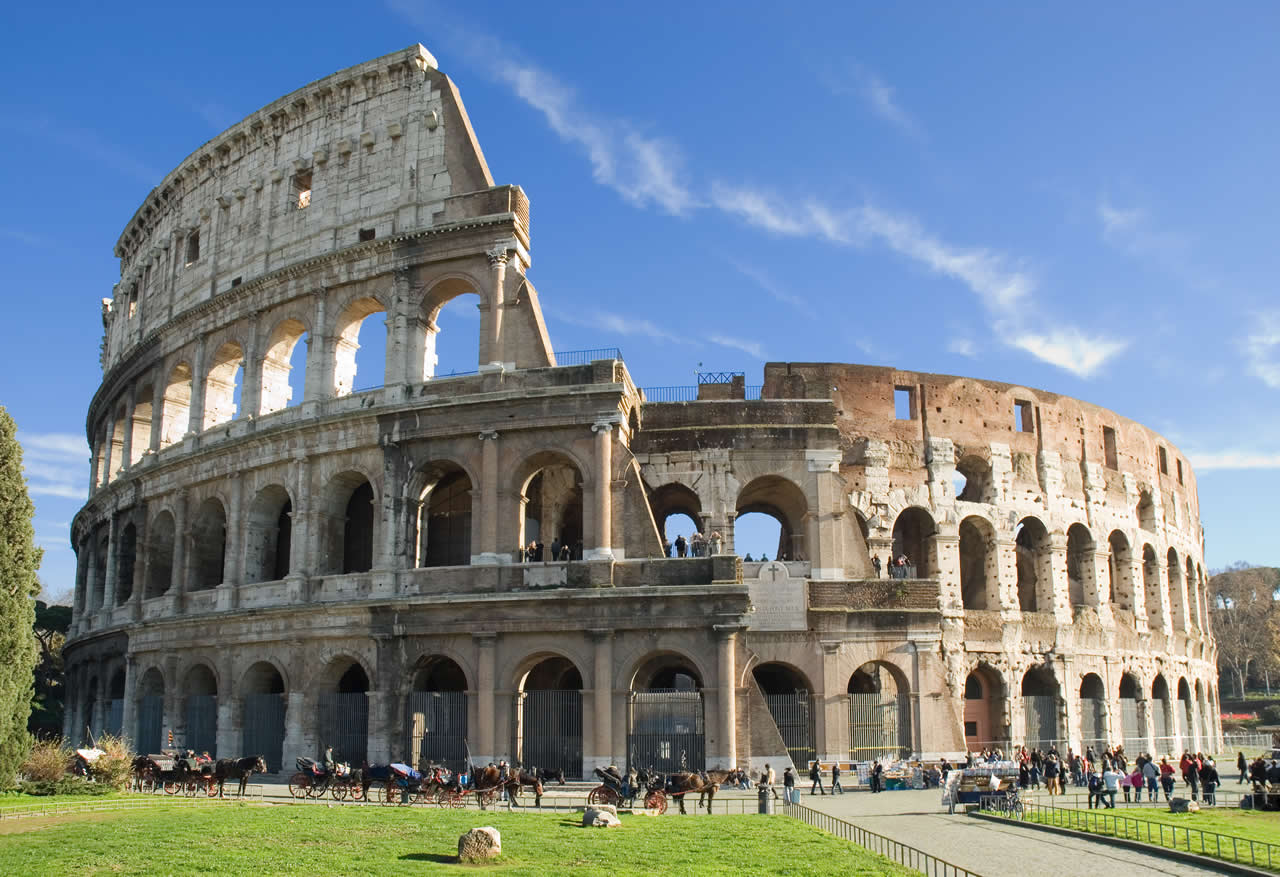 The remains of the Colosseum in Rome

One of the lesser-known facts about Rome's Colosseum is that it had what's known as the velarium. If it's the first time you've come across the word, the velarium was a large ring-shaped tarpaulin that covered a considerable part of the Colosseum's upper section. At the outer edge of the top floor, 240 vertical wooden masts were erected, on which the huge sail-like awning could be raised so that the spectators in the stands inside were shaded from the blistering sun.

It's thought that the massive awning was made out of the same type of linen (or canvas fabric) that was used to make the sails for the ancient Roman boats of the day. Even the word velarium comes from the Latin word velum, which means sail or more literally, "the veil". If you take a look at the lead image of this post you can see the velarium partially in use in the upper left-hand section of the stunning painting by Jean-Léon Gérôme's titled Ave Caesar! Morituri te salutant.

Not to be confused with Roman blinds, and although not really a blind as such, the velarium performed a similar function to the blinds in a conservatory on a hot day. In other words, when it gets too hot, we pull the blinds to cool the room down. Since the Colosseum could hold around 50,000 spectators, keeping them cool was no mean feat. After all, imagine all of them packed together like sardines on a scorching Italian summer's day whilst baying for blood in the centre of the arena below them.

To attract the crowds, stop them from fainting and keep them coming back for more, it was essential to keep them comfortable each time they visited - hence the invention of the velarium. Like the nearly 200ft tall Colosseum itself, the velarium was a technical masterpiece and an incredible piece of engineering. It was linked together from numerous tarpaulins, each of which had to be cut differently due to the elliptical floor plan. It was, therefore, an extremely complicated thing to construct and because of this, had to be operated by very experienced sailors from the Roman imperial fleet. 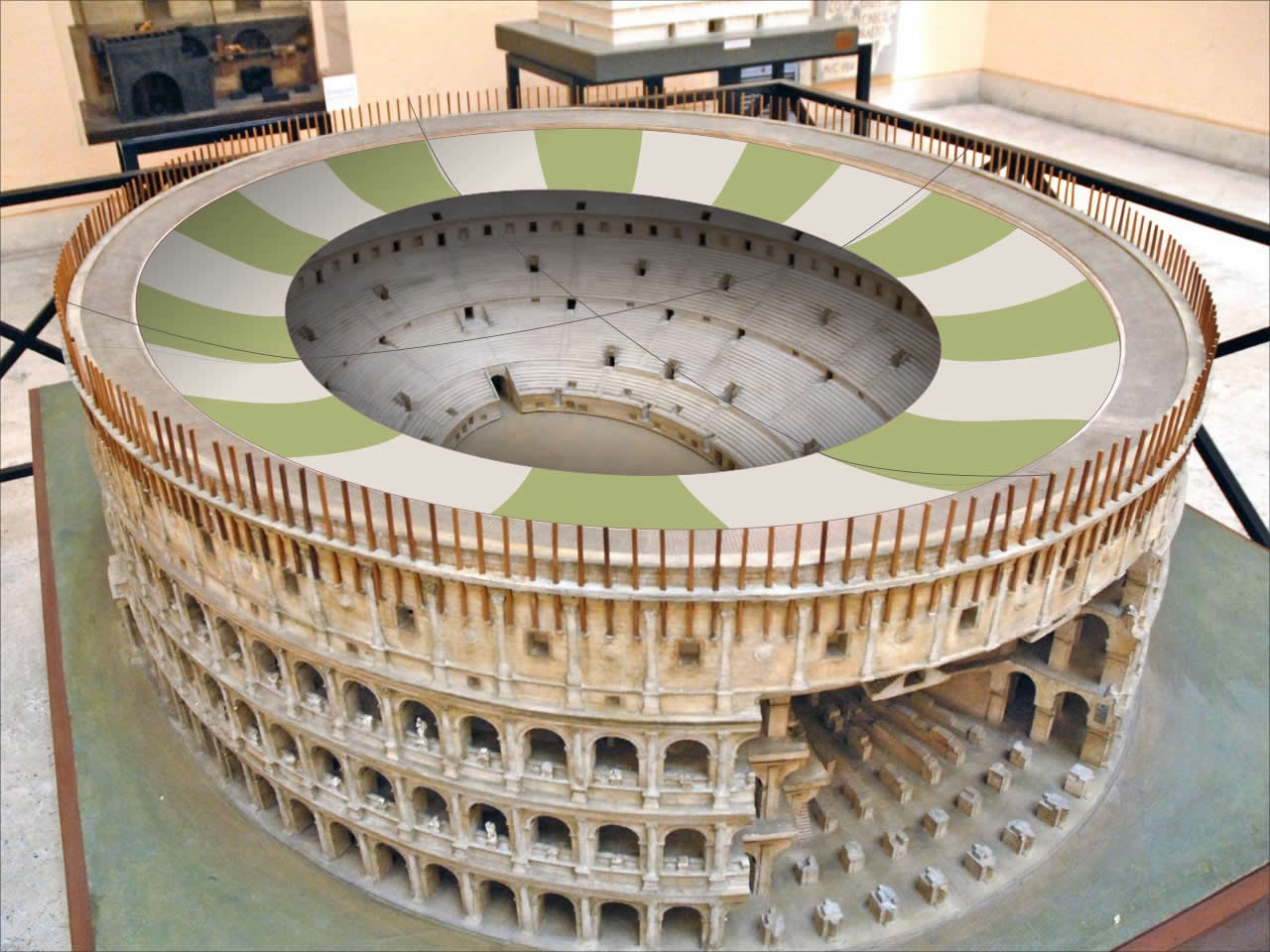 Skill, experience and nimble fingers were required to operate the velarium and so a fleet of sailors were called to Rome from their unit at Misenum on the Gulf of Naples everytime it needed handling. Aside from their general operating duties, their other main task was to pull the velarium back in quickly when the winds got too strong. The skill and speed required to do this was necessary to prevent the entire construction (including the poles) from collapsing and falling onto the bloodthirsty crowd below.

As you can see from the intricate model in the image above, the Colosseum had a large number of mast brackets (240 to be precise) on the upper edge of the building. These were specifically designed so that the masts couldn't move around in their sockets and they were placed fairly close together to give the structure better stability when the velarium was fully open.

The inner edge of the sail construction formed an elliptical ring that was placed on the floor of the amphitheatre. The 240 ropes ran from this ring over the masts to the outside area of ​​the arena, where they were (it's assumed) anchored to 160 stone bollards. Winches were then used to stretch and stabilize the velarium. According to some accounts, the stretching was a tedious and laborious task that dragged on for several days and up to 1000 men were needed to fully assemble it from scratch.

Was the velarium a one-of-a-kind structure?

Although the Colosseum's velarium was unique in its sheer size, scale and complexity, it wasn't the only one of its kind. With the hot Roman summers and bustling cities, cover was often needed to shelter the inhabitants and visitors from the scorching sun. In fact, the velarium was a popular idea and there were many other "velaria" (plural) in theatres and amphitheatres all across the Roman Empire. According to scholars, when the games were announced, it was sometimes explicitly mentioned that the 'sun sails' would be raised, which would always bring a sigh of relief for the perspiring patrons in attendance.

Although the word "velarium" is little-used today, it was in common use prior to the 20th century and described any horizontally stretched canvas either in a room with a skylight, such as an exhibition or painting room or across a street/town square.

If it was made for a festive occasion, the velarium would often be decorated with ornaments or figurative paintings by important artists of the day. Sadly though, it wasn't customary to display it in public once the event had finished and it would therefore be taken down and packed away. Occasionally, you do still see valaria in some parts of the world although it's fair to say that if you do, they're unlikely to match the Colosseum's legendary velarium.