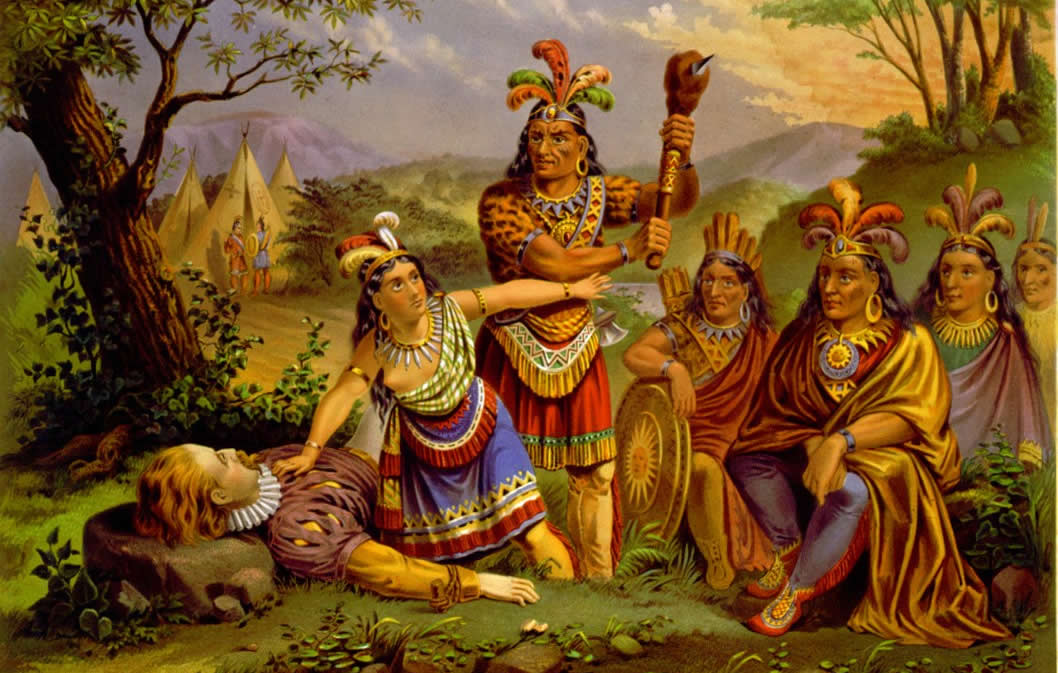 The History of Pocahontas - A Princess in Gravesend, Kent

At Blindingly Obvious, we are passionate about what makes our local area special. We are always on the lookout for interesting stories from our neck of the woods; and lo and behold, we have discovered another! If you have ever come across St. Georges church in Gravesend, you may have chanced upon a monument to the late Pocahontas. Curious as to how this statue came to be in a churchyard in Kent, we did a little digging.

Most of us are familiar with the Native American Princess known as Pocahontas through the acclaimed Disney movie of the same name. Although the film took the story of Pocahontas as inspiration, it is still very much a work of fiction. The real story behind the woman is not quite so frivolous and technicoloured. Pocahontas’s tale is pretty sad in the end.

So, what is the first thing that you might not know about Pocahontas? Perhaps that Pocahontas was not her name, not her only name at least. Pocahontas was, in fact, a nickname given to her by her father, the Chief of the Powhatan tribe, it translates as ‘playful little girl.’ She was born Meto-aka, in around 1595.

The tribal community into which she was born inhabited the land around the shores of, as they are now known, the James and York rivers, which flow through Virginia and down into Chesapeake Bay. After the death of Queen Elizabeth 1st in England, and therefore the eradication of the Sovereign’s issues with Spain and Scotland, money and manpower became abundant once more. The English took this as an opportunity to explore the world, and to expand trade. It was this that brought them, in the Spring of 1607, to the Powhatan tribe’s territory, subsequently threatening the Chief’s rule.

Perhaps understandably, there was hostility from the moment the English ships landed. There were numerous altercations and incidents between the foreign and indigenous peoples in the early days, culminating in a full-scale attack on the English-built fort by the tribe. This did not end well. The English were far stronger, their weapons more advanced and their strategies more effective. Needless to say, there was no love lost between the two communities when the story of the colonies began!

Before the Winter came, the majority of the Englishmen sailed for home. They left 105 men behind to seek trade opportunities, stabilise relations and to establish their community in the ‘New World’. They called this settlement Jamestown. Incidentally, the history of this very settlement is currently being explored and popularised by the global TV series of the same name. Perhaps Pocahontas will turn up in that at some point.

Her encounter with the English soldier, John Smith, is perhaps the element of Pocahontas’s story with which most of us are familiar. John was one of the founders of the Jamestown settlement and the writer of many a letter and document upon which the Pocahontas legend has been built! Smith went out hunting, alone, one December day in 1607. He was captured by members of the Powhatan tribe and bought in front of their Chief at the village of Werowocomoco. Surely this was his own silly fault; the risk of getting captured when hunting alone should have been blindingly obvious.

Chief Powhatan was preparing to execute Smith by clubbing, when his daughter threw herself between the two at the last second, saving his life. Following this, Smith was released and allowed to return to Jamestown. It was the resolution of this incident that marked the beginning of a strong alliance between Jamestown and the Powhatan tribe. This is the most popular version of this part of the Pocahontas legend. Some people say it happened differently, some people are of the opinion that this meeting is a complete myth. It is also theorised by some that Powhatan fabricated the whole thing in order to create a ‘saving of life’ ritual that would symbolise Smith’s friendship with the tribe.

Anyway, whatever your opinion on this, the fact remains that relations significantly improved from this point onward. The Jamestown settlement steadily grew, and the trade and goodwill between all communities flourished… until 1612 anyway!

The baptism of PocahontasJohn Smith was now long gone, he had been sent back to England years ago due to injury. The man in charge of Jamestown at the time, Samuel Argall, was of a more abrasive disposition than his predecessor. Argall had managed to get on the wrong side of the Powhatan tribe, a disagreement regarding trade, this had resulted in the capture and incarceration of eight English men. To counter this, he tracked down the Chief’s daughter and took her hostage.

Pocahontas, now 16 years old, was taken to Jamestown, where she was treated as an honoured guest. She was given quarters, educated and assured that her being there would serve to heal the fractured friendship between the town and the tribe. She never did return to her father.

She also met her husband during her time at Jamestown; a man named James Rolfe. In order to marry it was essential that she convert to the Christian faith. This she did and was baptised Rebecca. They were married in April 1614 and had their first child just a year later. 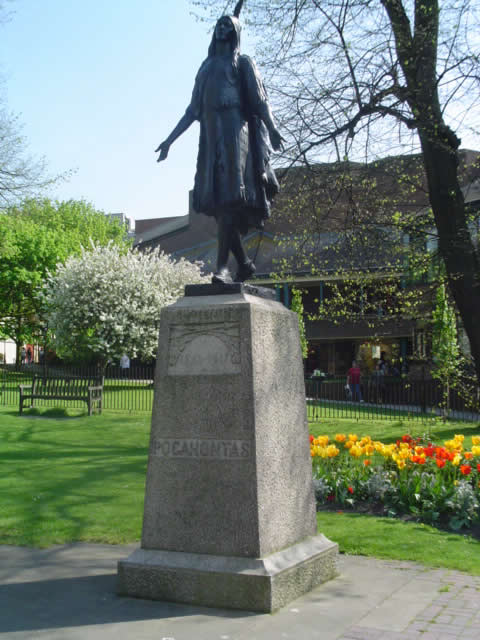 The statue of Pocahontas in GravesendYou may be thinking, ‘this is all very interesting and everything. But where does Gravesend come into all this?’ Well, in 1616 Pocahontas and her new family were put on a ship headed for England. The idea was that she would be presented to the English as proof of what a wonderful thing colonisation was, and how brilliant it was that the English were going over to America and ‘taming’ the ‘savages’. This seems awful now, but this was a time where the world was much smaller, and Pocahontas was the subject of a great deal of awe and curiosity. She was passed around like an exotic treasure, always treated with care and reverence. She was even a regular face in the court of King James 1st.

After a short time in England, however, she became ill; it was decided that home would be the best thing for her health. But, alas, it was too little too late. The ship had barely left England before she took a turn for the worse. She was taken ashore at Gravesend, where she soon died, and where she was buried.

It is not certain what she died of. It is likely to have been a western disease, such as tuberculosis, to which she had no immunity. She was 22 years old.

The version of this story told to us as children is a story of simple heroism; a version that will always be relevant. But, it also serves as a reminder of the collateral damage of colonisation, and that not everyone need be crammed into the same mould.

Community is not about uniformity, it is about tolerance and acceptance.