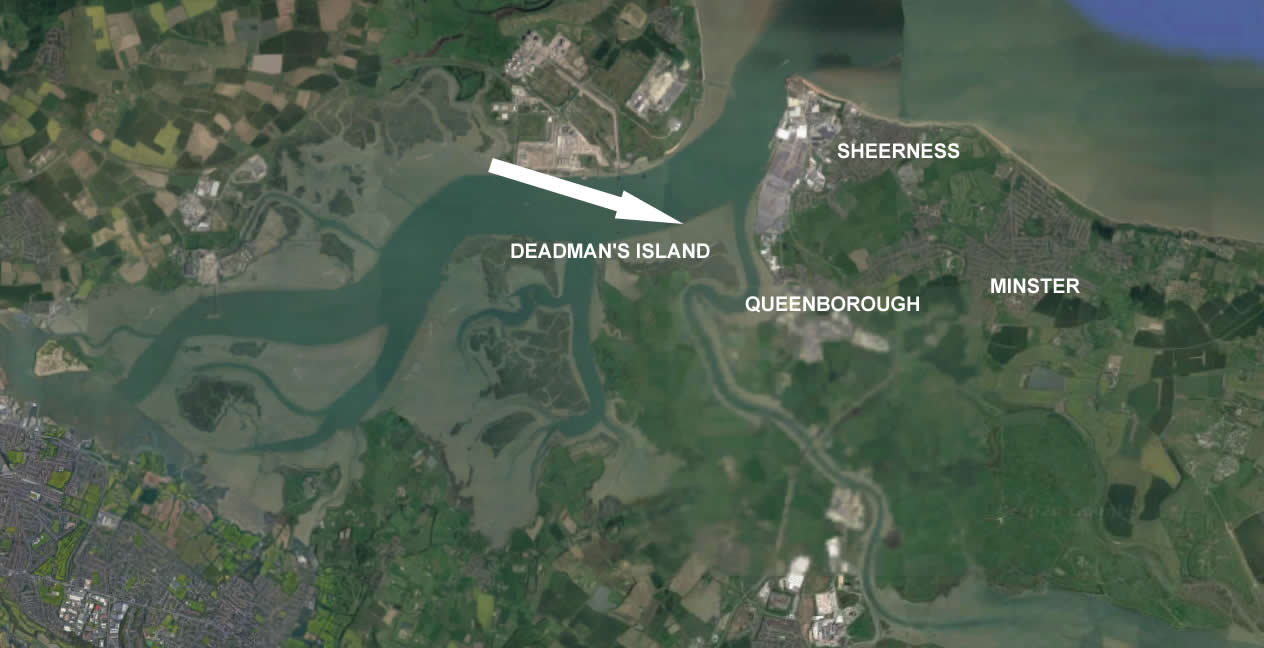 It never ceases to amaze me that, even after living in Kent for many, many years, there are still parts of its history that I've never heard of; Deadman's Islands is a case in point. If you're wondering where it is, Deadman's Island is located at the mouth of The Swale river just outside Queenborough on the adjacent Isle of Sheppey. It's a flat, muddy marshland that's home to a myriad of stunning birds who breed and nest there and as such, is designated a Site of Special Scientific Interest (SSSI). The Island also boasts an impressive collection of fauna and other plant life.

The "Island" is actually quite large, measuring approximately 1200 x 200 metres and is just over half a mile from nearby Queenborough, a Sheppey town situated on the other side of the River Swale. It's owned by Natural England and is off-limits to the general public meaning that you need permission to set foot on it. If all of this doesn't sound too out of the ordinary, you're probably wondering how this particular piece of marshland acquired its somewhat macabre name.

How did Deadman's Island get its name?

Sounding like something you'd find on a pirate's treasure map, Deadman's Island is so named because of the hundreds of unknown people buried there in unmarked, wooden coffins that are now being uncovered at low tide and washed out into the Thames Estuary. Because of this, it's not uncommon for Kent residents who live by the sea to find human remains from the site washing up on the shore.

Why is it a burial site?

The bodies weren't buried there recently; with the majority of them being placed there somewhere between the 1600s and 1800s. In fact, in 2016 the remains of over 200 people were found on the island. Whilst there is still uncertainty as to each individual's circumstances, it's generally agreed that the majority of them died on the numerous prison hulks that were anchored nearby. Because of the cramped and squalid conditions on the prison ships, disease was rife, with outbreaks of cholera and typhoid being commonplace. It's also been suggested that plague victims could have been buried there too.

It's thought that the prisoners on board the hulks were there for a variety of reasons. Although both petty criminals and more serious offenders were incarcerated there, it's also assumed that many of them were French prisoners of war who ended up on the prison hulks after their ships were captured by the British during the Napoleanic Wars. The trouble is, since none of the wooden coffins have any information about the identity of the bodies they contain, we'll never get an accurate picture. Also, because of the constant erosion and steadily rising sea levels, many of the remains inside have been washed out to sea or are scattered in fragments across Deadman's Island.

This posed the obvious problem of reburial at other locations since the bodies were not intact. Originally, when the relentless erosion started to uncover the bodies, many were exhumed and reburied nearby on St Mary's Island. Unfortunately though, when the land was scheduled to be redeveloped, the remains had to be reburied yet again at the St George's Centre in Chatham.

From Sheppey to Australia and America

On a brighter note, many of the convicted criminals that did survive their sentence were often deported to far-flung parts of the earth such as Australia, Tasmania, and the USA where they at least had the chance of living a more fruitful life. If you'd like to know more about this somewhat sad yet fascinating chapter of Kent's history, there's a more in-depth exploration on this Hubpage.

When we're taking a bit of time off from our day job of installing bespoke window blinds, we love to exploring the history of Kent; our favourite part of the world.